Skip to content
Posted on February 4, 2012February 5, 2015 by Andrew
I hear Zoe shriek with excitement. Rushing into the living room, I realise she’s peering out the open window at a thick haze of spiralling snowflakes.

Like a true antipodean, I put on my warm clothes immediately. Before I’ve finished, I’ve had an excited txt from Kat (despite being sick in bed), seen countless facebook updates about the snow from fellow London based Kiwis, and noticed that ‘#uksnow’ is already trending on Twitter.

How interesting to watch modern communications reflect that most basic feeling of joy that every antipodean feels when they see flakes begin to fall. It’s like being nine years old again.

I’m soon on the bus, bundled up tight. I get off at Westminster, determined to see Big Ben under snow. Of course I’m a little premature… 20 minutes of snow isn’t really enough to whitewash parliament!

The central city is filled with rowdy Kiwis, all dressed as sheep or wearing marmite T-shirts. Today was the infamous Waitangi Circle Line Pub Crawl. They’re all as obsessed with the snow as I am. I yell “kia ora” and a guy with a full face tattoo smearing across his cheeks grins and calls back “cheers, bro!”

I meet Paul at the National Gallery, where we have tickets to see the Leonardo da Vinci exhibition in an hour (see blog post here).

We fill in the time skidding along Trafalgar Square.

Snow continues to fall heavily the entire time we’re at the exhibition. By the time we leave, London is covered in a thick white blanket. It’s late, dark, and freezing, but people everywhere are running, shouting, and having snowfights. 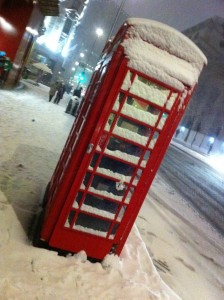 We’re standing on a pedestrian island halfway across the road, walking towards our bus stop, when I see a an out of control van skidding towards us in what felt like slow motion.

The driver is tooting his horn and looks terrified. I realise he’s skidding on the fresh ice, and dive out of the way. He smashes into another guy, and then Paul, then about half a metre later is stopped in his tracks by a traffic light.

Meanwhile, the momentum of being hit by a car has pushed Paul backwards. Spooked, and trying to keep his balance, he runs backwards. Across the road. I hate to think what could have happened if the lights hadn’t been red at that precise moment.

On the other side of the road, he promptly slips and falls on his bum. Then stands up and yells at the driver. There’s the Paul I know and love. 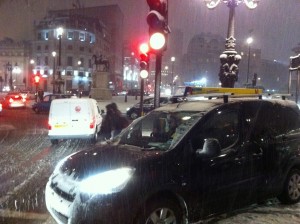 I go to comfort him. He’s white as a sheet, cold, wet, and shaking. He didn’t realise the van was skidding on ice until well after he’d been hit.

Our bus stops only halfway home and everyone has to get off. Apparently London transport isn’t very well equipped for snow. We walk the rest of the way.

Paul is fine the next day and has barely more than a few bruises to show off, but we both have trouble sleeping from all the adrenaline pulsing through our veins.