Skip to content
Posted on February 17, 2012February 5, 2015 by Andrew
I loved Cluedo, and I love Downton Abbey. So the idea of a live-action murder mystery in a big old English country manor was irresistible. I bought us a pair of tickets on the spot back in June, but was somewhat bemused, when I rang, to find out that they were so popular there were no available spaces for eight months! Somehow these things do come around though, and sure enough, eventually the day came.We hired a car in Central London, which almost didn’t happen when I forgot to bring my passport as ID. The guy behind the Sixt desk had a crooked moustache and a permanently furrowed brow. There was no chance of discretionary pity. I disappeared around the corner looking for a decent 3G signal to download the passport copy I’d saved months ago, in the hope that he would deign to accept it.

At that exact moment Paul rocks up (we’ve both been out of contact and a little anxious due to phone network trouble), and for some strange reason he’s chosen to bring my suitcase instead of his. My suitcase which has in it my passport! A complete fluke that saves the day when the walrus behind the desk finally consents to let us drive away.

Soon we’re in the car driving north to Down Hall Country House, with Agatha Christie’s short stories in the CD player keeping us entertained on the journey. It’s meant to take 45 minutes, but it’s a good thing I allowed extra for traffic because it ends up taking over two hours! We arrive five minutes before the mystery begins, quickly rush our cases up to our room and then traipse around the house in search of the large drawing room where our dramatic evening starts taking shape the moment we arrive. 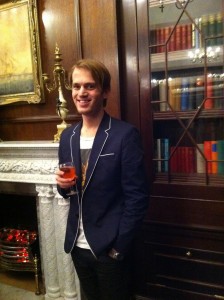 We meet a smarmy auctioneer, who informs us that Down Hall Country House is up for sale, following the suspicious Mediterranean drowning of its owner, whose cheating wife is set to make a pile off his life insurance. A police officer, with dodgy connections to a former maid in the house, is investigating.
Within ten minutes, we discover that he’s not really dead. We’re not sure what’s happened. The auction is off. His wife ushers us into the dining room to apologise for the inconvenience with a meal.
Only, before we’ve even finished our entrées, he’s gone and died again. This time right in front of us. He was poisoned. But how? And by whom? That’s our challenge for the next 90 minutes, over dinner and dessert.
The actors circulate the room. We’re given an envelope of clues in the form of newspaper clippings, letters and business cards. We’re free to ask the actors any question we can think of. I enjoy trying to trip them up by asking absurd, backward questions.
After dessert, each table guesses the murderer and method.
Ours, on a hunch following the admission of an affair with the former maid and a leaked email exposing a penchant for mind-altering substances, decide that the cop is crooked and place the blame squarely on him.
Every single other table believes it’s the auctioneer. Amateurs. 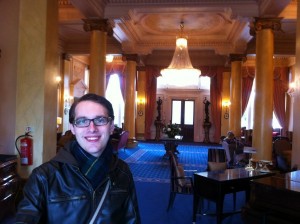 Once all the cards have been collected, the actors burst into the room for one final showdown that ends with the wife discovering her lover has been cheating her for money, the appearance of a mysterious knife-wielding hairy man, and the auctioneer admitting guilt before shooting the cop and running away. Only to be stabbed by the hairy guy.
In other words; we were the only table to get it wrong.
We retreat to our room with wounded pride, yet glad that we made the effort to get out of the city and do something a bit different.
The next morning, after sleeping in, we explore the grounds. It really is like spending a night in Downton Abbey. 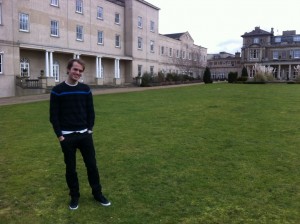