Skip to content
Posted on March 2, 2012January 20, 2015 by Andrew
If you’ve had the misfortune of running into me this week, I’ll forgive you for thinking I got into an accident with a lawnmower.

I’ve been sort of growing my hair ever since I left New Zealand. Well, the top anyway. It got to the point where my fringe reached the bottom of my nose. This became so high maintenance that it only looked good for bursts of approximately 30 seconds. And my morning routine started to require over a minute of hair-related activity, which is just excessive. I’d make a useless female.

So, I made up my mind to cut it around the one year anniversary of leaving home. But not just cut it a little; we’re talking radical departure.

Determined to surprise everyone, I didn’t mention my plans to anybody. I bought clippers on eBay, and for some unknown idiotic reason set about attacking my scalp in the half hour space I had at home between work and Norway.

It all went very smoothly. With a large mirror to help me, I clipped all my hair off using the longest setting on the clippers – 21mm.

I cleaned the clippers, then quickly checked to make sure I hadn’t missed anywhere. I had. There was a patch towards the middle of my scalp that was a few millimetres too long.

Zzzzzz… off it goes. (No that’s not sleeping, that’s clipper noise).

When cleaning the clippers I had bumped the length down to the lowest setting. 3mm.

I was too horrified to take a photo of the result. But it looked something like this. 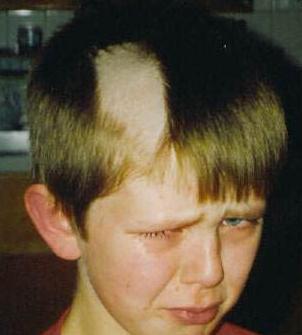 So, I did the only thing I could do: made like a member of the KKK and introduced my entire scalp to the sunlight, or at least within a few millimetres of it.

Within ten minutes, I’d gone from the longest hair of my life to the shortest. I’m pretty sure I came out of the womb with more.

Then I did the only other thing I could do: put on a hat.

I didn’t take the hat off until hours later in our hotel room, when I scared Paul half to death by whipping it off.

But it got worse.

When I showed him the back, he laughed so hard he almost farted, then took a photo to show me what I’d done:

Yes, that’s right. I shaved a finger sized spot right in the middle of the back of my head completely bald. My head is doing the fingers.

When we got back to London he tried to touch it up. But there wasn’t much that could be done. I now look like a moth bitten fur coat. Only with shorter hair. 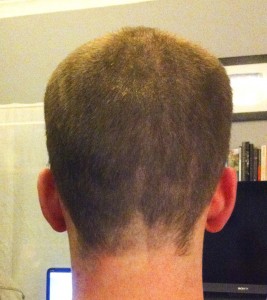 At least it will grow, I guess.