Today I learned what not to wear to court.

It all started in June last year, when a rude official knocks on my door saying we haven’t paid our TV licence (who knew there was such a thing!?).
I explain that our landlords are responsible for it, to no avail. We automatically fail the test, because he can see a TV behind me. So, I show him that it doesn’t work. He barges past me into the bedroom and points at the TV in there. I turn it on to show him it has unbearable reception, which is why we’ve never watched it.

He disagrees; “it looks fine to me”.

“Would you really watch this?” I ask incredulously.
“Yes, of course”.
Not his first lie, and not his last. We throw him out.

Fast-forward seven months. I receive a letter from the West London County Magistrates’ Court. It says “FURTHER STEPS NOTICE” in big bold lettering, then goes on to tell me that I have been fined £250.

I call the next morning, the moment the office opens. It’s about the TV licence. Apparently because I moved house, I missed about a hundred demand letters telling me about my impending court date. Somehow, they tracked down my new address 7 days before obliterating my credit rating permanently.

Would I like to pay with MasterCard or Visa?

She sounds irritated when I tell her that there’s been a series of mistakes and I’ve never actually failed to pay a TV licence, telling me I need to call another court for that.

I call the other court. They have no idea what I’m talking about and abruptly tell me to call another department, then hang up.

I google the other department, but their phone number is disconnected. Luckily I discover there’s a government helpline for people in my pickle.

I am cut off immediately, and an automated American voice says “the other party has ended the call” on loop.

I try again several more times over the next few weeks with the same result.

Eventually, I write a letter outlining my plight. Before posting it, I decide to call one last time.

Finally, my call gets through. Someone very helpful tells me that I must make a statutory declaration to say that I was unaware of the proceedings against me. This will invalidate the previous case, overturning the conviction and withdrawing the fine. But it’s not all over – the TV Licence people are free to start all over again (and probably will).

To make this statutory declaration, I must show up to the court in person between 9:15 and 9:45 on any weekday. I’ll fill out a form and sign it, then be on my way.

Luckily I have a very understanding boss. She is happy for me to go the next morning, and tells me she was in a similar situation a few years ago. All I’ll have to do is fill out a form and swear on a bible. 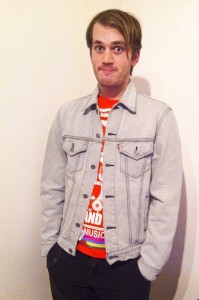 The next morning, I head to the courthouse for 9:15 sharp. Being casual Friday, I’ve dressed down. I’m wearing brown corduroy trousers, scuffed grey shoes, bright aqua socks (which are visible), a pale grey jean jacket, and the loudest T-shirt I own. It’s bright orange. Basically I look like either a confused hippy or a colourful hipster.

I fill out the form. I sign my name. She hands me my paperwork back. Great, all to plan.

The blood drains from my face. I feel faint. Say, what?

But she’s moved on to the rioter behind me.

I find my way to courtroom one and sit down by the door.

An hour later, I still have no idea what’s going on and nobody has gone in or out of the courtroom. I decide to seek help, and eventually find a security guard.

He offers to check to make sure that I’m on the courtroom schedule, and pops inside. When he comes out, he tells me to go into the courtroom. Apparently I’m up next.

To muffle noise from the corridor, there are two doors to get to the courtroom. In-between them, the guard pauses and says to me “I should probably tell you that this judge is a real bulldog. He’s the meanest one here. Just thought you should know”.

In the courtroom, the guy who was ahead of me in the statutory declaration queue over an hour ago is standing in the box, quivering before the magistrate. He’s wearing what I would assume is his only suit, and his white shirt is transparent with perspiration.

Bulldog was an inspired metaphor for this judge; both for looks and character.

After daydreaming about Law & Order for roughly five minutes, I am snapped back to reality by a nasal voice calling “Allen, Mr Andrew James”.

I assume this means I should approach the witness box. Is that what you call it? Am I walking too fast? How would an innocent person walk? Perhaps I should have left my bag on my seat. But someone might have nicked it. This is a courthouse, after all.

The magistrate is holding my entire file (both pages). He glares at my orange T-shirt and says nothing. He doesn’t have to.

After a pregnant pause, he starts barking questions about the form I completed downstairs. He makes fun of me for writing “February 2012” in the field ‘date learned of court proceedings (approx)’

“Awfully specific, aren’t we Mr Allen”. Why did it say approximate next to the question then!?

I explain that I don’t know the exact date I received the final notice letter off the top of my head, but I can find it if he’ll give me one moment to refer to my sent email folder.

I take his eyeroll as acceptance and start furiously scrolling through emails on my iPhone, looking for the one I sent my former landlord the day I found out (who of course denied all responsibility).

While I do so, he scans the paperwork in front of him.

“May I remind you, Mr Allen, that everything you say here will be checked out by the court, and I am empowered to charge you with perjury and hold you in contempt of court.”

“I have your court records in front of me. You rang on the 24th of January.”

Obviously the cow who hung up on me actually bothered to record the call.

“Oh, that must be the date I got the letter then!”

He doesn’t look amused, and just stares at my shirt.

I apologise for getting the date wrong by one week, and explain that I wasn’t aware I needed to supply the exact date – because the question said ‘approximate’.

He still says nothing. I button up my jean jacket.

I point out that the case against me was several months ago. Whether I found out about it on the 24th of January or in the month of February doesn’t change the fact that I was unaware of its existence until after it had concluded.

He glares. Everyone else in the room is staring at me open-mouthed. I’m not sure if they were more shocked that I talked back to the judge, or that I wore orange to court.

“I’m going to sign it” the bulldog announces, abruptly.

“But if I find one word of your testimony was false, I will come down on you with the full force of the law”.

It wasn’t a question, but he seems to be waiting for an answer.

“This removes your previous conviction. However, don’t think you’ve gotten away with it. You will receive another summons to a new court date. And may I suggest that you don’t rip it up and throw it away. This time.”

He should write a lecture on condescension.

I assure him I won’t, grab my bag, and hightail it out of there – orange shirt and all.