An opening in the clouds formed the shape of a heart. Through it, a single star became visible. The North Star. “Make a wish”, whispered the spirit guides to our unlikely hero, a gangly lad from the bottom of the earth on the cusp of an age he never dreamed he’d live to be. 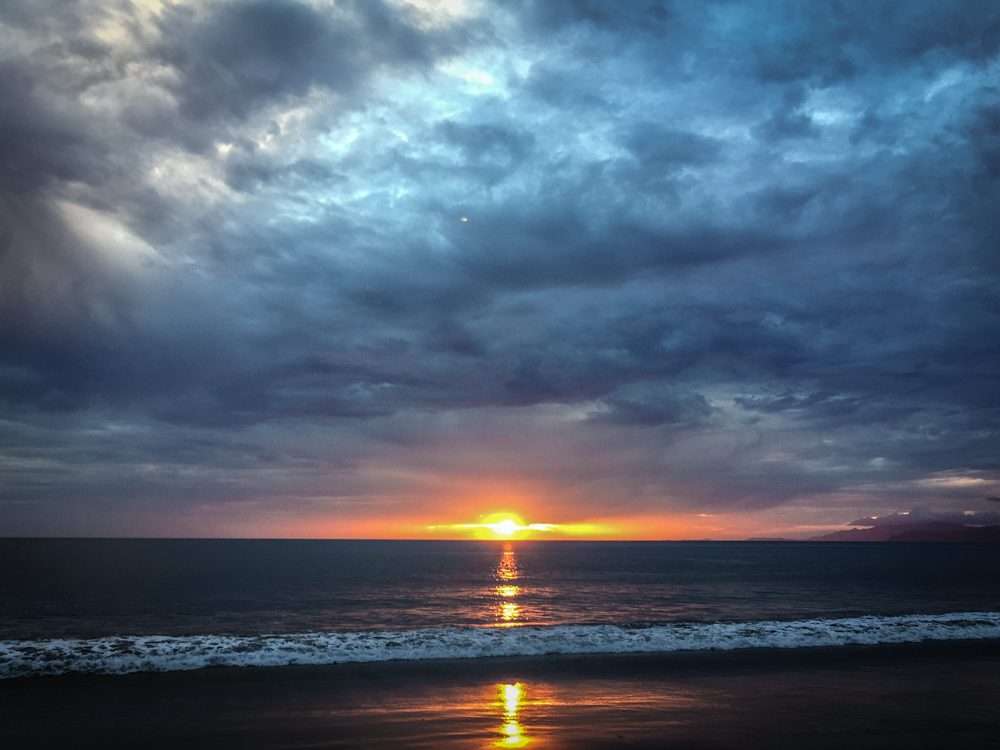 But before making his wish, he glanced out towards the horizon. Somewhere beyond the storm clouds and crimson ribbons of retreating daylight, was a land he once called home. And, with the thought of home, he knew exactly what to wish for. The whimsical, impossible wish he’d always chosen as a child: to fly.

And precisely as he made his wish, the North Star darted, then disappeared, extinguished into the night. Or, rather, a single firefly entered his vision at precisely the place he was directing his wish. Had the North Star still heard him? He didn’t know.

But, I’m getting ahead of myself; that’s not where his adventure began. Barely two days earlier, he’d arrived in the land of volcanoes and impenetrable jungle. Besieged with delays, darkness, and rain as thick as his accent, he fell into a deep slumber, awoken only by the arrival of his spirit guides: Mari and Eli from the faraway land, who he had once offered shelter in his own concrete jungle. Remembering his hospitality, they resurfaced to guide him through the most treacherous parts of their homeland to safety.

As morning light broke, a thick mist like smoke descended on the kingdom. Our unlikely hero and his spirit guides tiptoed stealthily to waters edge, submerging themselves in a thermal spring, where a rocky outcrop protected them from the battery of driving rain. 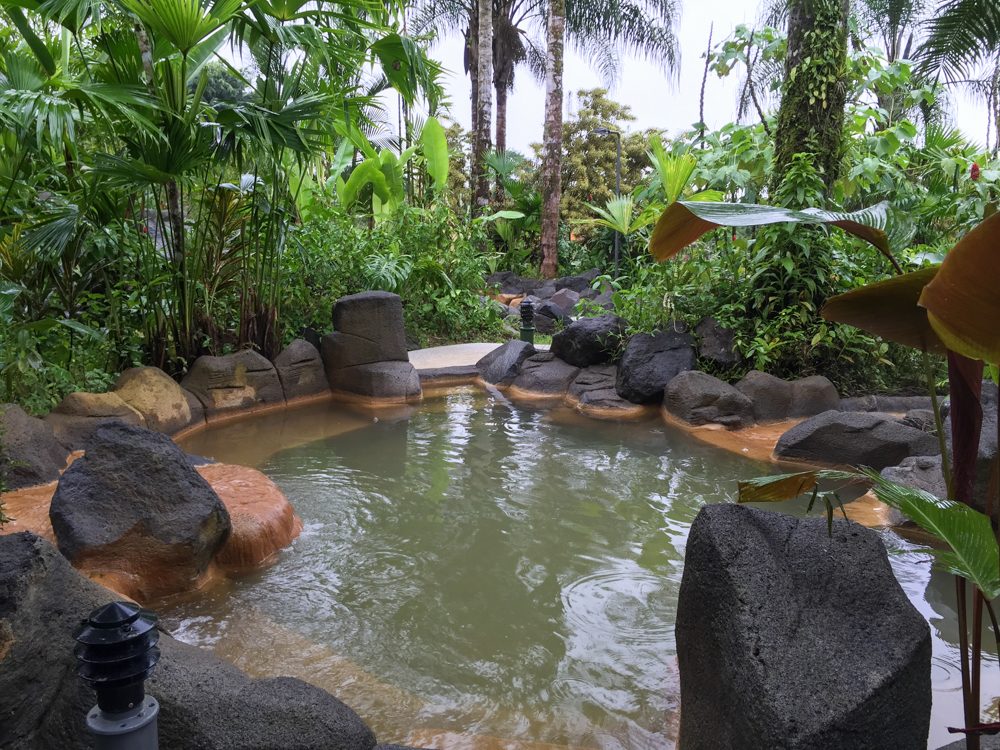 In that moment, the world beyond the thermal pool ceased to exist. They held their position for so long that their fingers and toes appeared aged, when suddenly our unlikely hero spied, betwixt the trees, the mist was rising. In an instant, the rest of the world existed once more, and their reward for passing the challenge of the fog was a brief glimpse of the volcano Empress herself. 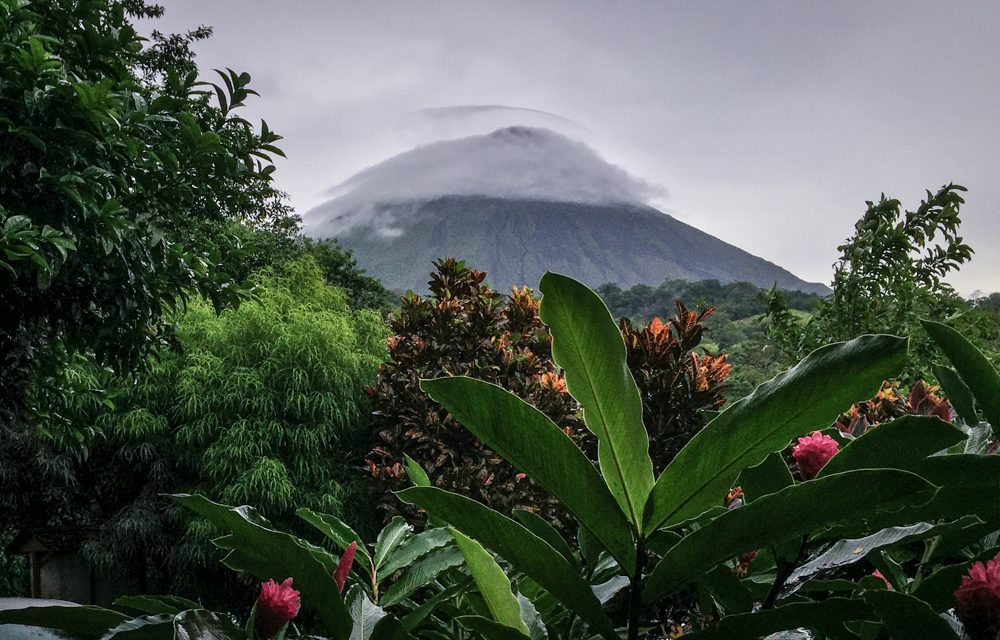 The splendour of her beauty took hold inside our unlikely hero, and he declared that nothing in all the land could be so beautiful as her. He set out on a new quest to prove it. But he was wrong. 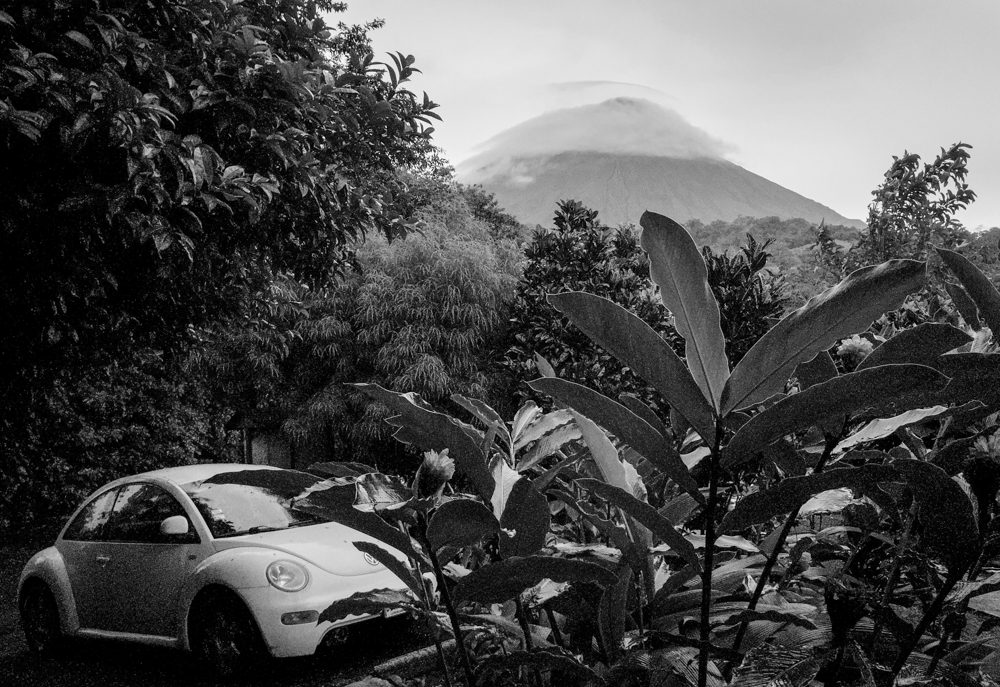 In the depths of the jungle, he discovered a bird too wild to capture in anything but a memory. Crest of lapis lazuli and wings the colour of a waterfall at twilight. And he declared that she was beautiful, but not so beautiful as the volcano Empress. And on he went.

With the help of his spirit guides, he crossed a swinging bridge as tall as the tallest trees.

As he looked down, he glimpsed the gushing river, plump from fresh rainfall. And he declared that she was beautiful, but not so beautiful as the volcano Empress. 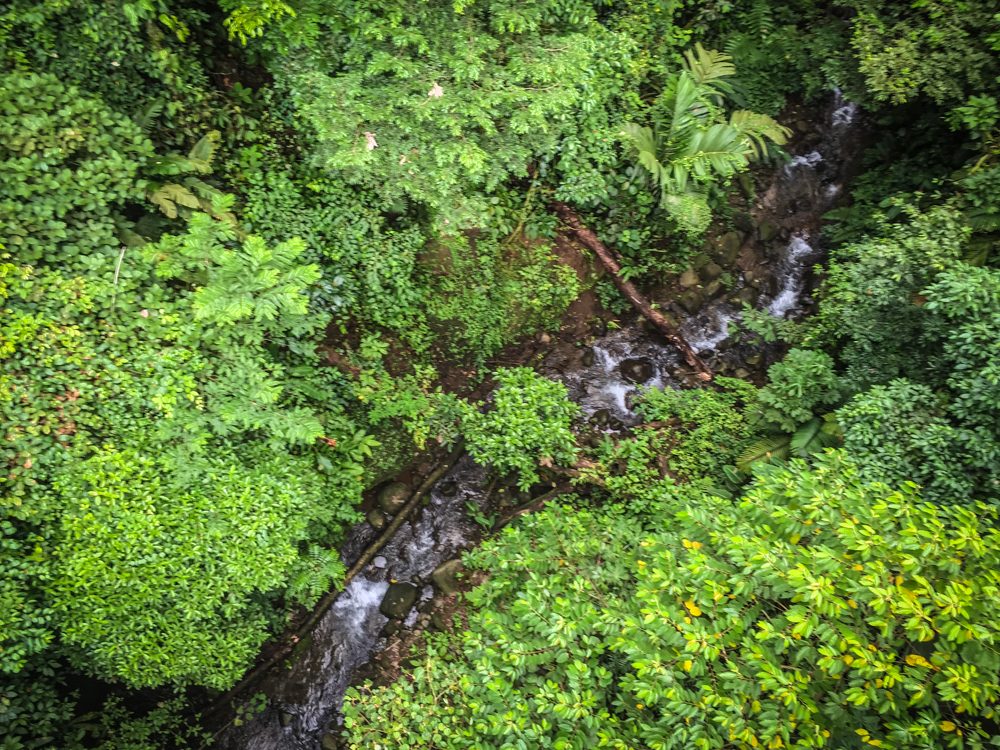 He came across an innocent child of the jungle’s most terrifying villain, still and serene. And he declared that she was beautiful, but not so beautiful as the volcano Empress.

Many hours later, our unlikely hero and his spirit guides reached the edge of all the land. A thin strip of sand was all that separated the deep jungle from the wide ocean. A wilderness beach.

As night began to steal the light, our unlikely hero and his spirit guides stripped down to their undergarments and descended into the warm waves. Eli warned him to drag his toes through the sand as he walked, so as not to disturb the creatures of the deep. But he was so captivated by the North Star, the firefly, and his wish, that he failed to heed her advice.

Daylight became a memory, and darkness clutched our unlikely hero. Suddenly, a bright light from the water. Then more. Was it the reflection of the North Star in a show of fool’s trickery? He looked up. The heart-shaped hole in the clouds had stretched open, revealing thousands of stars, each glistening.

A glance back revealed scores of fireflies dancing at jungles edge like kerosene raindrops.

But the light in the water wasn’t the stars, and it wasn’t the fireflies.

The ocean’s tiniest inhabitants, invisible by day, revealed themselves in luminescent splendour, glowing like fallen stars recalling their proud place in the heavens. With each minute, the light grew brighter, until the sea, the stars, and the fireflies were indistinguishable.

He floated on his back, agape at the sheer wonder of being alive in that particular moment. And for that moment, it was almost like he himself was in the heavens, flying.

But danger lurked. A warning unheeded. As our unlikely hero lowered his feet to the ocean floor, he disturbed a creature of the deep. But the ray, with its mighty barb, took pity on our unlikely hero. Despite the unwelcome intrusion, the wise ray simply flapped the water into a bubbly haze and retreated into the depths.

Rattled but unharmed, our unlikely hero raced back to his spirit guides. Together, they abandoned the water, in all its beauty. As they ran across the wilderness beach, each footstep created lightning bolts as the smallest creatures illuminated their path with pulsing light.

At the edge of the jungle, the fireflies swarmed like sparks from a fire. Our unlikely hero stared in amazement, as his spirit guides observed.

The wind carried a musky scent like burnt oak in a swamp. Eli whispered something but our unlikely hero was so entranced by the fireflies that he didn’t hear her. She snatched his attention, her eyes bulging with the gravity of what she was about to tell him.

Our unlikely hero had learned his lesson from the first time he left advice unheeded. He ran.

With a surge of adrenaline, the three of them sprinted faster than ever before. Torch light revealed hermit crabs scurrying all over the beach, clamouring to get their shells out of harm’s way.

The trio retreated, allowing the creatures of the night their dominion over the wilderness beach once more.

And that was when our unlikely hero realized the entire experience had been so beautiful that he forgot to declare his quest for beauty over. For the wilderness beach was surely the most beautiful thing of all.

My Costa Rican fairy tale took just a long weekend. To recreate it, visit Arenal Volcano (for the hot springs, volcano, and jungle), and Playa Cabuyal de Liberia (for the wilderness beach, fireflies, and bioluminescent plankton).

And every good fairytale has a story: mine is the advice to travel whenever you can, even if you only have a weekend, and even if you can’t afford to go far. Put it in the diary, hop in the car, and see where you end up.

But I’d better not mention the two hours on the tarmac and three hours on the side of the road that bookended my fairy tale. I can’t have you deciding it’s all too difficult. 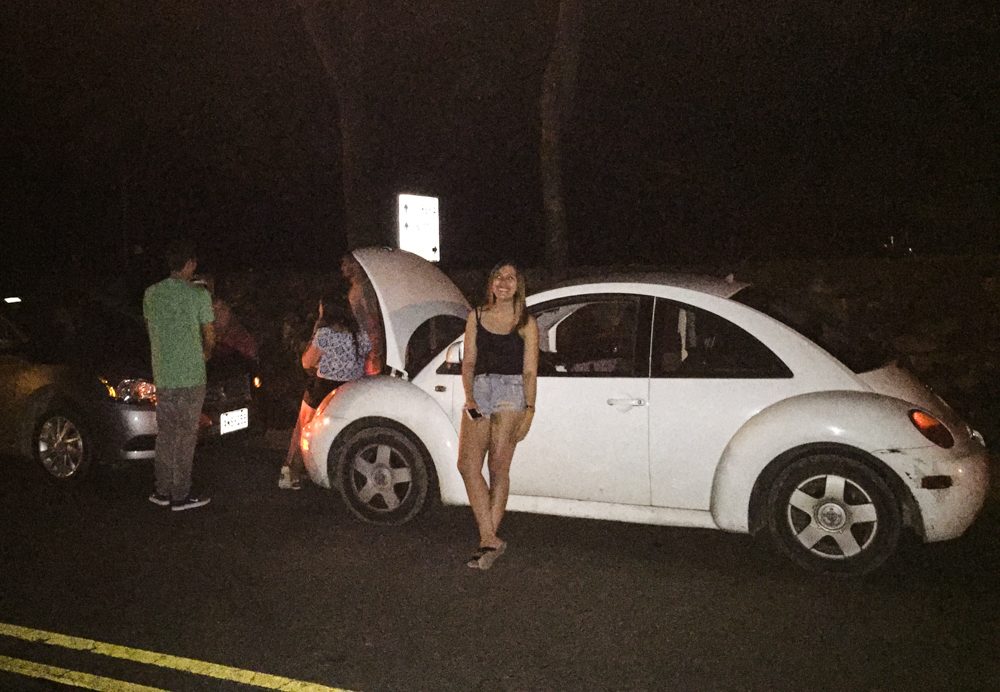 Focus on the fairy tale. 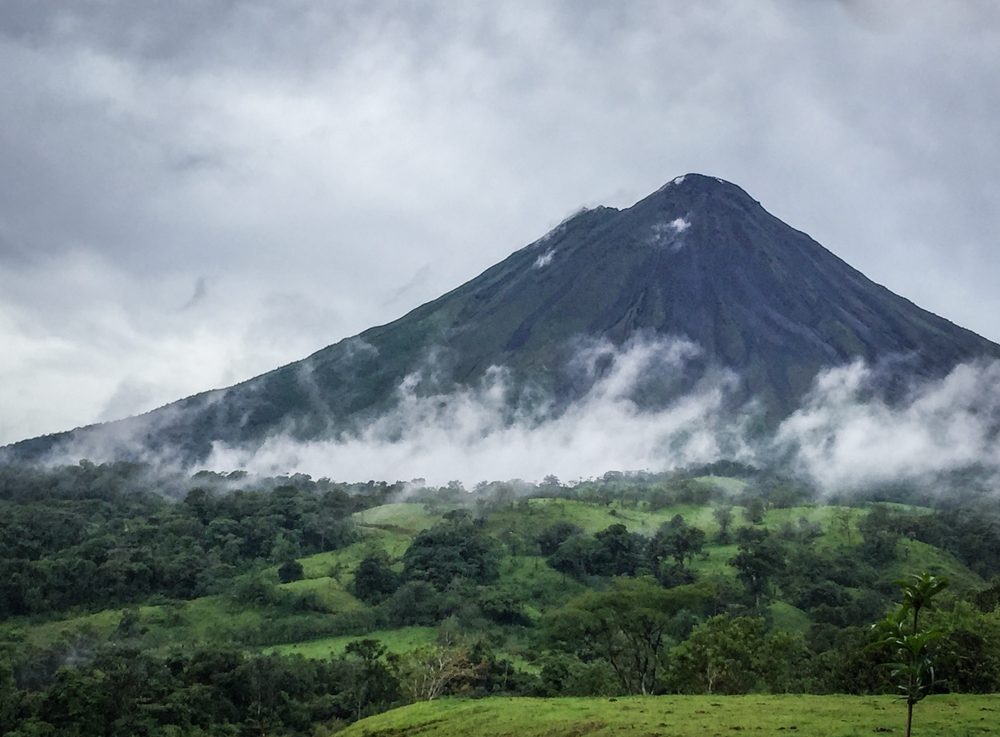 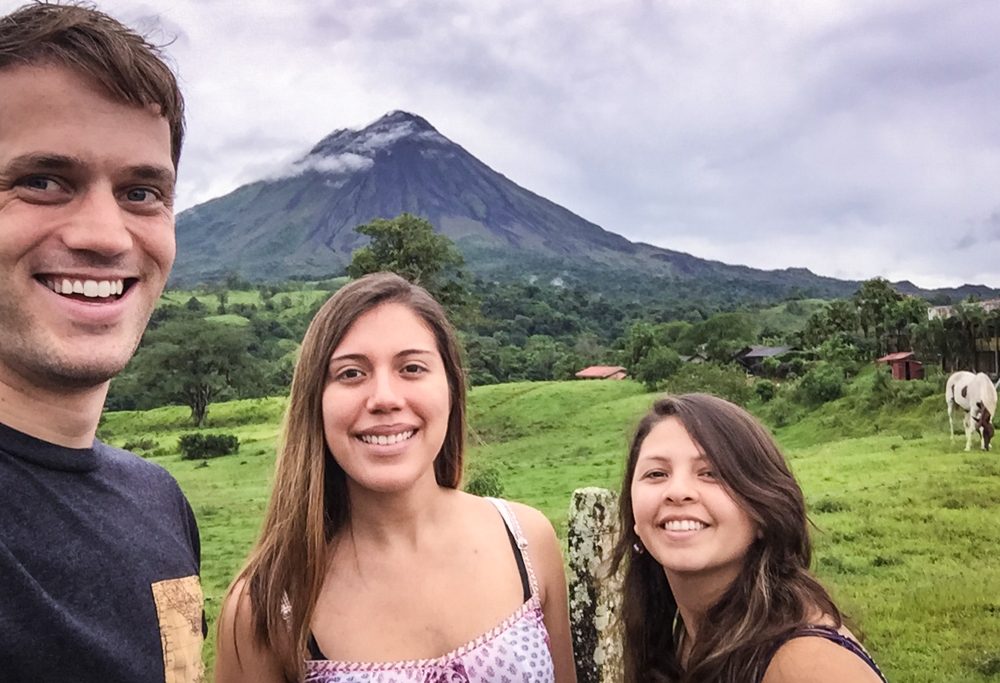