Skip to content
Posted on August 29, 2011January 20, 2015 by Andrew
We took our little suitcases with us to work on Friday, and just hours after the long weekend began we were in the air.

Majorca is a Spanish island in the Mediterranean. It’s a two and a half hour flight from Luton airport which takes you directly over Barcelona.

We’re staying in the big smoke: Palma. This is a case of you-don’t-know-where-to-stay-until-you’ve-been. Though our hotel is lovely, with a great pool and friendly staff, the location is a lot more developed than we were hoping for. 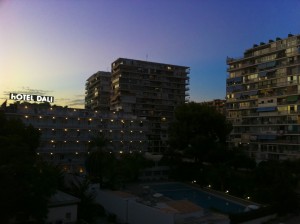 Nonetheless, there are still some cool beaches nearby, and the next morning we set out exploring. We catch the #3 bus to the end of the line – Illetes. It’s lovely, but very crowded.

We spend a good few hours there before heading into the city.

Palma is known for it’s enormous Gothic cathedral. It’s nothing short of magnificent.

After a quick but delicious gelato near the cathedral, we head to Es Baluard Museu – the Modern Art Gallery. Unusually for a modern art gallery, the building exudes history. I guess being a 16th century bastion will do that to a place! The exhibitions are well curated, and the space fascinating.
My favourite space is a Boltanski exhibition housed underground in the old water cistern; Signatures. It’s the perfect space for it. The room is like half a cylinder, with the floor the only flat surface. It’s smoky so you can’t see the back of the room. stairs lead down from you, making you feel like you’re on a shallow stage. The only light in the room is a series of old fashioned fluorescent light tubes fashioned into impenetrable shapes. You’re not sure what you can hear at first – low, repetitive guttural sounds. Eventually you realise that it’s a slowed down heartbeat.
When you leave the room, an assistant offers you the chance to become part of the exhibit by recording your own heartbeat. I did.
We found a great Thai place for dinner. My dish was served in a pineapple!
Sunday we did very little, reading by the pool and planning the following day. Monday was to be special. We realised that we couldn’t see Majorca properly from our accommodation and decided that the only way to get the side of the island we were hoping for was to hire a car and drive there. So, on Monday we did.
Compared to Palma, Es Trenc is deserted. We spend the entire day there, swimming, relaxing in the sun and reading. The water is the warmest I’ve ever felt. 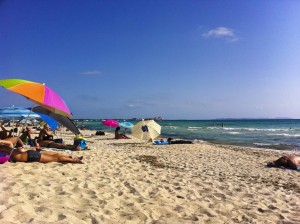 We did learn the hard way that the oldest, most overweight Spaniards enjoy swimming nude, but obstacles aside it was an incredible day. 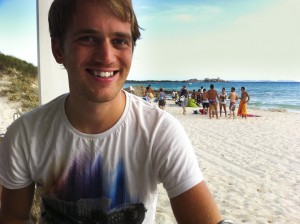 About halfway along the 3km beach is a little hut where you can buy toasted sandwiches, paella and, most importantly, sangria. 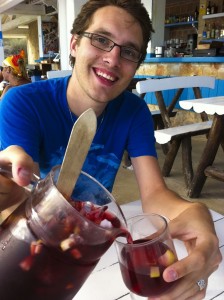 At the end of the beach are a few abandoned luxury houses. It’s the only sign of life here, and refreshing to see on an island so crammed with holiday resorts. I couldn’t shake the feeling that somehow Es Trenc managed to beat capitalism.

When Paul climbed the decrepit old concrete staircase I was worried he’d fall through the ceiling. But he soon gasped at the view. It may have smelt like urine, but the view was undeniably incredible. 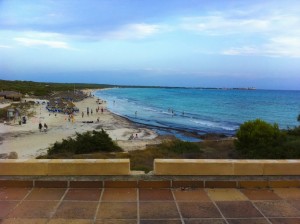 We used the last of the daylight reading together on homemade chairs someone had put together out of bricks and large pieces of wood, then drove back to the airport to come home.