Skip to content
Posted on September 21, 2011January 19, 2015 by Andrew
Arriving in Meknès, our cab driver overcharged us and then dropped us on the wrong side of town, but not before giving us his phone number so we could call him tomorrow for a city tour at the miniscule price of just 500 dirhams. When we finally arrived at our riad about 45 minutes and several guides on foot later, we vowed to phone him at 3:00am!
I was asleep within five minutes of arriving in the room, leaving Paul and Frankie alone to play husband and wife around Meknès alone for the afternoon.
Meknès is one of the most ancient cities in Morocco. Everything has been around for millennia. At the museum, there are rooms full of priceless artefacts, and signs up everywhere strictly reminding visitors that there’s no photography allowed.
Somehow, Paul and Frankie found the best (or worst) security guard ever, and he practically forced them to take photos of everything! Whenever they got to a priceless room, he would look around, then quickly move the rope and usher them in to sit on the furniture and touch anything they liked!
By the time they returned, I’d slept for about five hours. We chatted up on the roof for an hour or so, then headed back down to our room where I had no trouble sleeping for another 13 hours.
In the morning, breakfast was provided. I didn’t want to offend anyone by not eating, so the others helped me construct an elaborate ruse that ensured my plate looked well used. 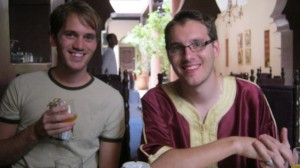 After breakfast, we haggled with a taxi driver to take us to Fès via Ifrane, which is a cute little town where it snows in winter. They have an English speaking university, and we all dreamed about what it would be like to live there someday.