Skip to content
Posted on September 22, 2011January 19, 2015 by Andrew
My impression of Fes is that it’s a more authentic version of Marrakech.
There’s the same hustle and bustle, but it’s much easier to get lost. The souks seem to exist more for Moroccans than for tourists, which leads to both higher quality and a better starting price. For these three antipodeans hoping to discover ‘real’ Morocco, it felt like a pretty great start.
While Paul visited the museum, Frankie and I headed over to the tannery. A guide passed us a handful of mint to disguise the smell, then walked us to the best vantage point where he proceeded to explain the month-long process of getting raw hide to the type of leather we see every day. He also told us that the tannery in front of us was the largest in Africa, supporting 320 families. It began in the 13th century and had been handed down from father to son ever since.
I found a jacket I loved, but unfortunately their asking price was aimed at rich French tourists… even with heavy haggling there was no way I could get it down to a reasonable level.
We took an hour and a half to get home, lost in the maze of tiny alleys, dead ends and high walls. We’re not even sure when we crossed the river to get back, but somehow found ourselves wandering into familiar territory and were able to retrace our footsteps back.
When we returned to our room there was a curious note from Paul that said: “on the roof (amazing!)”.
We ventured upstairs and discovered a breathtaking view over the city. We sat there and chatted awhile before Frankie and Paul went to grab some dinner. Thankfully, I didn’t have to watch them eat. I had a bath instead. 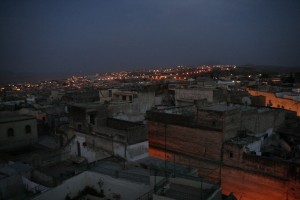