Skip to content
Posted on March 17, 2012January 20, 2015 by Andrew
The Swedish equivalent of a coffee break is known as Fika, and it’s infinitely popular. In fact, the coffee in Stockholm was so good that I felt like I was back home in Auckland again.

The best little café in Stockholm (if I may be so bold!) is called Chokladkoppen, and it’s located at the bottom of a cute IKEA-chic building right in the heart of Gamla Stan; the old town. Dim bulbs dangle with excess wiring from the ceiling, providing enough illumination to admire the oil paintings but not enough to spot a pimple on the face opposite you. Perfect.

Having arrived in Stockholm the night before, this is our first excursion into the city, and we’re excited to sample chocolatey perfection in the form of a delicately presented double shot mochaccino.
From the café, we walked to a tower in Slussen that boasted the best views of Stockholm, but unfortunately it was closed.
So we headed back along the edge of Gamla Stan to the National Museum of Art. The collection was breathtaking.
From there, we had the pleasure of walking along the edge of the water for about an hour to our next stop. Stockholm is on an archipelago, and has many bridges between islands, so you’re never far from water. 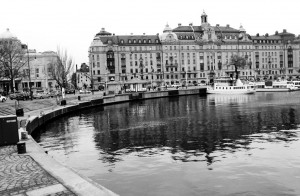 Our next stop was undoubtedly my favourite part of the entire trip. That moment when you know it was already worth coming.

The Vasa Museum sounds vaguely interesting when you read about it. It’s not until you actually visit and see it for yourself that the penny drops about how incredibly fascinating this really is. The Vasa was the pride of Sweden’s fleet until it sank in 1628. Sweden’s water is cold enough that it doesn’t host the vast numbers of wood destroying sea creatures, so when the wreck was discovered in 1961, it was still intact. The war ship was slowly dredged from the ocean floor at the request of the King, and salvaged with advanced wood restoration techniques.

The result isn’t just the pride of the Vasa Museum, it’s the only thing on show in this purpose built venue. 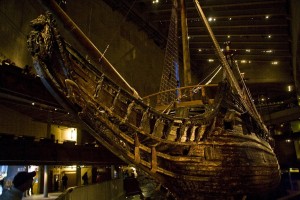 And it’s incredible. The sheer scale blew my mind. The most comparable experience of my life was watching Pirates of the Caribbean at IMAX. And this was seriously cooler. 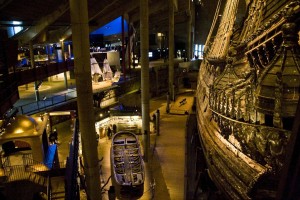 We left the Vasa Museum seriously energised in that way that only happens when you experience something truly unexpected on your travels.
When we left, the sun had come grandly out. 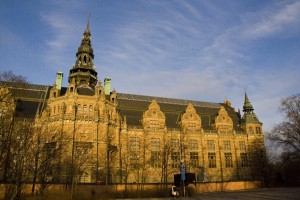 We walked back to the tower we’d tried to visit earlier, which was now open. We arrived just in time for sunset. However, Murphy’s Law dictates that something must go wrong at this moment. And in this case, I forgot to update the settings on the camera from the dark Vasa Museum; so captured a whole lot of nothing. At a stretch I was able to squeeze this out of the best photograph:
One of the few things I knew about Stockholm before visiting was that the metro system was a work of art. Specifically, the hard rock that was carved out to create the metro has been painted to become part of the charm of the network.
This was our next stop: 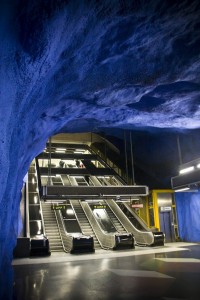 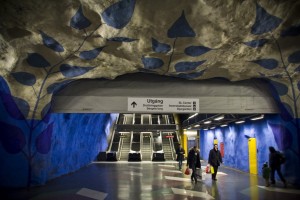 The guard at the station was able to give us an art guide to the metro system, so we embarked on a trip all over Stockholm encountering the weird and wonderful public art installations. 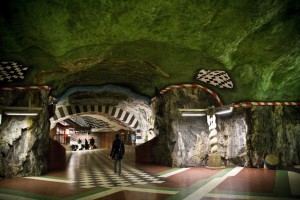 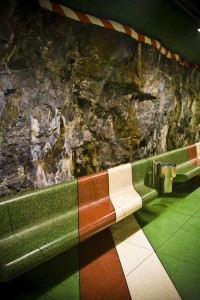 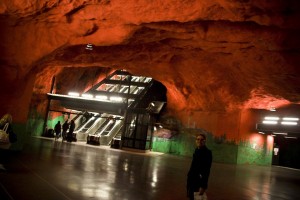 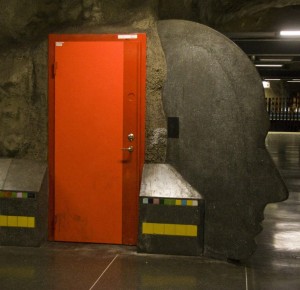 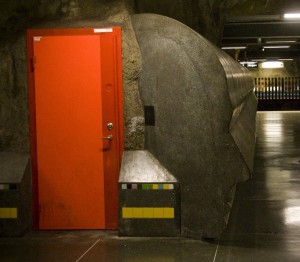 Definitely the first metro system I’ve ever encountered that’s worth of a tour in its own right.
Our final day in Stockholm was spent again exploring Gamla Stan, walking right through the centre of Parliament: 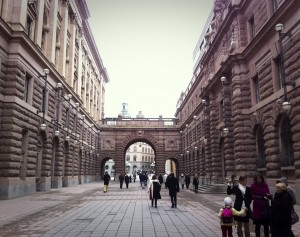 We returned to Chokladkoppen for a traditional Swedish open sandwich along with the perfect white chocolate cheesecake. Afterwards, we explored the Modern Museum of Art. Then headed back to the airport, and home again to London.