We checked out of our hotel on a high today, because we were going to take the train into the countryside to visit Monet’s house and garden, including the famous lilypond. We were looking forwards to hiring bicycles to ride through the countryside and enjoying fresh baguettes on the banks of the Seine.

But it turned out that A) our tickets weren’t valid for that train, B) we couldn’t afford the extra, C) there were less trains than Paul had realised when planning, D) while speaking to an agent to figure out points A – C, the only train left.
So we went to Versailles instead. 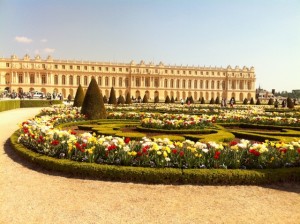 The photos are lovely… but in truth the day was hampered quite a lot by the hordes of people. We had to queue for 45 minutes just to buy tickets, then when we were ready to enter the Chateau, that took another hour and a half. In the blistering heat. We paid several euros for a 7-Up, and it was worth it.

We left feeling a bit disappointed, to be honest. I felt similarly when I visited five years earlier, but for opposite reasons. Last time, the whole place was under scaffolding, the grounds had iced over, all the fountains had been drained, the trees were bare, and the statues were covered in tarpaulins. This time, it was lovely but impossible to really experience anything. The opulence was difficult to even appreciate, as you were always 20 people back.
When we left Versailles, we picked up our luggage where we had left it in Gare du Nord and headed to the airport. On the wrong train. Luckily we realised our mistake before it was too late, and got on the correct one. But got off at the wrong terminal. Luckily, I had allowed plenty of time to get through, and we didn’t miss our flight. But Immigration at Luton took so long that we missed our bus to town. Ah, the dramas of travelling.  I love it, really!
AA