Today I learned why the French never put their feet on the seat in front of them when traveling on the metro.

It was late at night and we were on our way home from Monmartre. I was alone in the carriage because we’d had a disagreement over which end would provide a more convenient exit at our station, and Paul was sitting alone at the other end of the deserted train.

When we entered Porte Dorée, I noticed that there were people on the platform. Ten formidable guards with machine guns, to be precise. And they didn’t stay on the platform.

Moments later they march on to my carriage. The ringleader comes right up to me shrieking “en pieds! EN PIEDS!!”

Now, if he’d written it down I would have understood. But I was always crap at the verbal part of French class. So I just stared at him blankly.

Eventually my slow brain processed the Français/Anglais translation and I removed my feet from the chair. The guards disappeared as fast as they’d arrived.

Paul missed the whole thing; he had fallen asleep (with his feet on the chair) at the other end of the train, and was woken up by a [somewhat more congenial] guard of his own. Less of an assault, more of a “get up you stupid boy, this is the last stop”.

I didn’t tell him about my ordeal until the next morning. I was too busy sulking for picking the wrong end if the train. 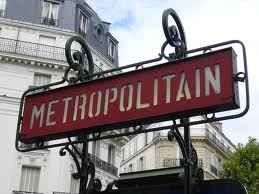