All antipodeans become insomniacs when they first arrive in London. For most, it gets better after a few days when their jet-lag subsides. But not for me. I couldn’t sleep for a whole other reason.

I would rather sleep outside than spend another night on the bony sack of nails our incompetent landlord had the nerve to call a mattress.

It was about 20cm shorter than my legs, or the base that it came with. The middle was the saggiest you ever saw, bowing so much that you couldn’t actually rest it remotely flush against the wall. But the worst part was the springs.

Decades of insomniacs before me had clearly obliterated any foam or padding that had existed in its former life. This beast was nothing but spikes with a bit of material on top.

You couldn’t lie on your side, it was too painful. You had to stay on your back so your surface area could share the load around. That’s the same tactic they use on beds of nails. I laid on one of those once. It was bliss by comparison.

It took us over a month of daily complaints to get a new mattress, but finally we did. The landlords didn’t take the old one away, so we left it up against the side of the building hoping someone would take it away.

Evidently, someone did. A few nights ago, I was walking along our street when I spied a homeless man lying by a dumpster, on… you guessed it.

This morning, I decided to grab a photo of him. When I went back there, I saw him lying in the same spot, but on the concrete.

The mattress was poking out the top of the dumpster. 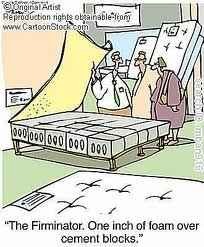