Skip to content
Posted on July 2, 2011January 20, 2015 by Andrew
Walking into Siena, we could see that our day was going to be something special. Other travellers all over Italy have been jealous that we were able to plan our trip to put us in Siena on the day of the annual Palio. 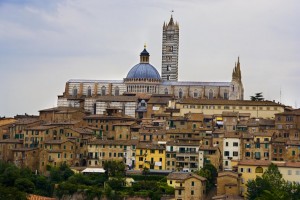 Twice a year, the whole city grinds to a halt for a day of festivity and intense competitiveness. Everyone in the city is born into one of seventeen contrada, and the Palio involves ten of the seventeen competing in the form of a horse race. 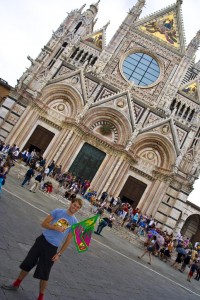 We decided very quickly which contrada we wanted to support because we liked the uniform. And their symbol is a dragon. So we bought flags and dressed up too.

The entire city comes alive as each contrada marches through the tiny streets in costume, with drummers, horses, riders, flagbearers (who do cool tricks) and even guys in armour.

50,000 people are locked in the centre of the Piazza del Campo for four hours. We turned up really early to make sure we got a good spot. 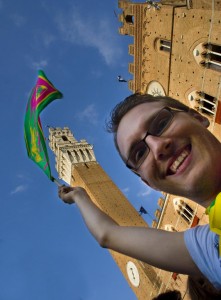 The contrada march in one by one. A band plays the Palio song every 20 minutes or so. It’s kind of like the march of the nations at the Olympics, but with flag throwing tricks. 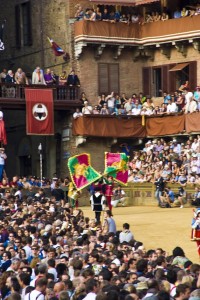 About three hours later, after lots of marching and ceremony, one flag waver from each contrada marches out and they all show off at once.

Then, the horses come out. Picking based on colour was a bit dumb, as our horse was a bit feral and nearly knocked the rider off before he even got to the starting line. 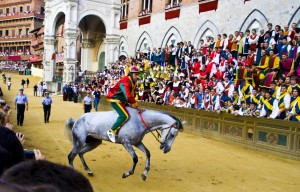 It’s quite violent – more than half the riders fell off their horses and we saw a guy get trampled. (he was fine though).

Within seconds of the race finishing,  the entire crowd rushed on to the track, cheering and crying. 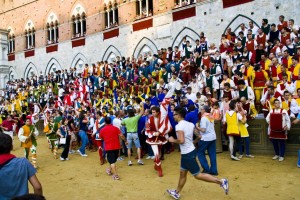 We walked back through chaotic celebrations in the winners area. On the way, we passed grown men weeping in some of the other territories. 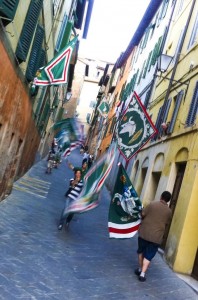 We had to park miles away, but sunset over the city was a great sight on the walk back. 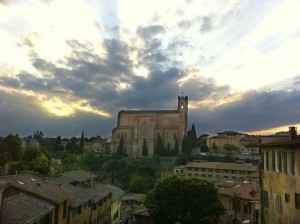