The only European trip we booked before even leaving NZ has arrived. I’m still pinching myself.

We’re spending the next two weeks chasing the Mediterranean around the Rivieras and down to the Amalfi Coast, then crossing the Adriatic. I’ve written out our basic itinerary here in case any of you have tips or suggestions.

We’ll be flying into Marseilles, then taking a train to Nice and Monaco the next day. The train after that will take us to Cinque Terre, the Italian national park with five tiny towns perched on rocky coastlines.

From there we head inland a bit, picking up a car in Pisa (and checking out their tower), then driving to Florence. The combination of heat and queues has driven a decision to stay there only for 24 hours before heading South to Siena for their famous Il Palio festival on 2 July.

Next stop is Rome, where we’ve again decided to stay only for a day, as we’re trying spend most of our time off the beaten track. From Rome, we drive further south to grab a pizza in Naples before relaxing on the Amalfi Coast in Positano for a few days.

Most of the day we leave Positano will be spent in Pompeii, before driving four hours to Bari on the East Coast. We’re going to Bari not because it’s beautiful, but because it’s a port town. After dropping off the car, we’ll be spending the night on a big creaky ferry crossing the Adriatic.

By the time we wake (hopefully rested!) we’ll have arrived in Dubrovnik, Croatia. I promised myself I’d come here years ago when I saw a photo like this one in a book on my Aunty’s coffee table: 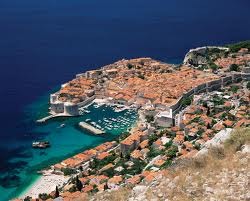 So, assuming we don’t get mugged somewhere along the way, this is where I’ll be turning 25.

One thought on “The Birthday Trip”